Updated video today on this issue:

Click to expand...
Interesting input from the UTG video - not saying I think thats a root cause, but it may have an influence on failure though. I am seeing a strong influence from basic design such as the horizontal lifter orientation (the UTG video), the oil path relative to the MDS system (what does the MDS do to oiling supply at the lifters) and the lifter tray support (lack of support to prevent lifter rotation in the lifter bore).
Looking at the basic design of the motor I see a lot of similarities to Chevy's LS motor (the general layout crank oil pump, lifter tray, and MDS (AFM for Chevy's)), which got me looking at whether the Chevy has lifter failure issues (it does - to some degree) which appear to have questions relative to the lifter tray design - so I went back to inspect my failure and this is what I found: 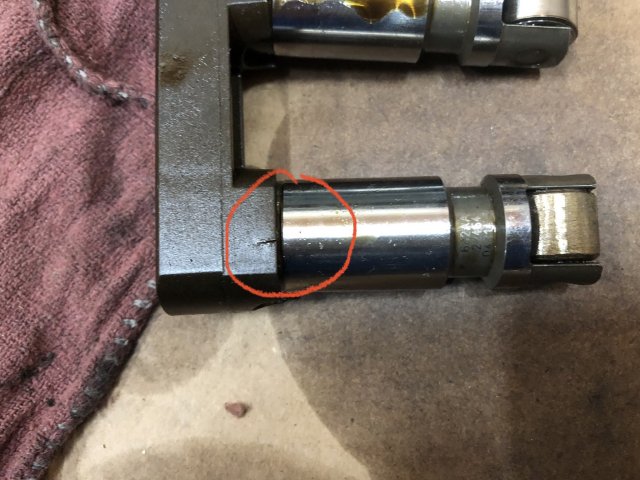 I noticed the lifter was very loose in the lifter tray (the lifter would fall out and the tray could not hold the lifter). The lifter tray was cracked on both upper and lower sides - (ref the circled areas in the pics)
So, if your into your motor (pulling the heads for any reason) I would recommend replacing the lifter trays as they will wear and may contribute to the failure I had - not sure of the cause and effect relationship of the tray, but I know my lifter rotated in the tray - causing more damage to the cam...
The replacement (Hellcat lifter trays) seemed better, but I think I would rather have a lifter tie bar like you find in most aftermarket roller lifter pairs.
You must log in or register to reply here.
Share: Facebook Twitter Google+ Reddit Pinterest Tumblr WhatsApp Email Link